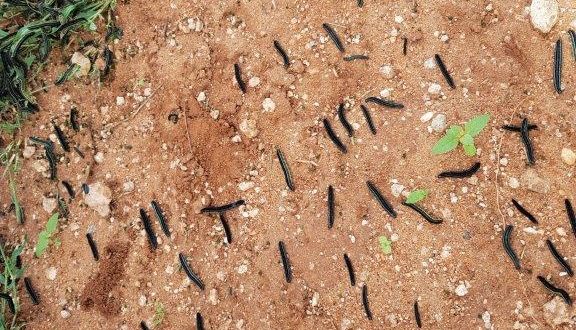 Fall Armyworm (FAW) (Spodoptera frugiperda):  FAW infestations continued affecting maize and other cereal crops in several places in Ethiopia, Kenya, Tanzania, and Zimbabwe, where control operations were launched by the affected farmers with assistance from their respective line Ministries. The pest is expected cause continue causing damage to crops in other regions across the counties and regions it has invaded.

African Armyworm (AAW) (Spodoptera exempta): AAW outbreaks were reported in Ethiopia, Kenya, South Sudan, Tanzania, and Uganda where the pest was reported affecting maize and other cereal crops, and control operations were launched by the affected farmers and MoAs.

AAW infestations were reported in Handeni, Korogwe, Muhenza, and Pangani districts in Tanzania where MoA provided technical and material support (6,250 liters of pesticides) to the affected farmers.

In Uganda, localized AAW infestations continued in the central parts of the country during early May, and ground control operations were in progress with technical and material support from the MoA; 95% of the infested areas were reported controlled by the end of May.

AAW outbreaks were reported in South Sudan where maize fields were reported severely affected as of April 30 in Mundri East and West Counties of Western Equatoria State. According to a rapid field assessment jointly conducted by FAO/SSD and the State MinAgri in Western Equatoria, all locations the team visited were reported affected by AAW. Damages were mostly caused to cereal crops (maize and sorghum) and some emerging growth and seedlings of groundnut in Mundri East (Kasiko Boma, Biti, and Bishop Gwynne area) and Mundri Centre County (Bangolo Payam). More than 90% of the crops were reported destroyed as most of them were at an early and most vulnerable stages. i.e., emerging/seedling stages. The pest was also detected pupating and adults appearing, a situation that could lead to another wave of larval infestations provided ecological conditions remain favourable. Some 1,700 households were reported affected by AAW in Mundri East. In Mundri West some 12,000 HH were reported affected. Reports of recent AAW outbreak were received from Kapoeta. The FAO field team continued monitoring the situation and will provide updates (FAO/SSD).

FAW infestations will likely continue in irrigated and seasonal maize, sorghum and other cereal growing regions across sub-Saharan Africa, Asia, and elsewhere during the forecast period.

There is a likelihood of AAW infestations continue attacking young, late planted and irrigated maize and other cereal crops and pasture in several countries. AAW will likely decrease in some countries where ecological and climatological conditions become unfavourable.