What is the Fall armyworm?

The Fall armyworm moth, Spodoptera frugiperda, is a major crop pest in its native Americas, especially in tropical countries where it breeds all year round. As with the endemic African armyworm, it is the caterpillar or larval stage that causes such havoc, voraciously feeding not only on cereal crops (maize, wheat, sorghum, millet, rice) and pasture grasses, like its African cousin, but also on nearly 100 other plants species (including sugarcane, cotton, Irish/white potato, tomato, tobacco, spinach, crucifers, chrysanthemum, cucurbits, cucumber, sweet potato, common bean, cowpea, soybean, groundnut, banana, ginger, etc.).

In late January 2016, Fall armyworms (FAW) were reported in Africa for the first time. Initial outbreaks were in West Africa (Nigeria, then Benin, Togo, São Tomé and Príncipe), mostly on maize. It has since spread to neighbouring countries including Ghana, Niger and Cameroon (though in many cases this has yet to be formally confirmed). In mid-December 2016, came the first reports of FAW in Southern Africa, first in Zambia and Zimbabwe, then neighbouring Malawi, Burundi, Botswana, Namibia and South Africa. By early 2017, it had started to spread into East Africa, including Tanzania, Kenya, Uganda and Ethiopia.

Fall armyworm is probably now present in at least 18 African countries. In several of these, including Tanzania, outbreaks of FAW have coincided with outbreaks of the native African armyworm (Spodoptera exempta). In many of the countries affected so far, vast areas of maize and other cereal crops (mainly millet and wheat) have been affected. For example, in Zambia, it was estimated that more than 124,000 hectares of maize was affected.

It is unclear how FAW reached Africa from the Americas. Most likely it arrived with imported plants, but it is also possible that it migrated across the Atlantic on favourable winds (probably over multiple generations). It is not yet known whether the outbreaks in Southern and East Africa are derived from the earlier West African ones or if they are independent introductions from elsewhere, but as FAW is a strong migrant (flying from Mexico and southern USA up to Canada every year), it is most likely that they migrated there from West Africa.

There are two subpopulations or “host strains” of the FAW, known as the rice-strain (RS) and the corn-strain (CS). These differ in their host plant preferences, and may explain why FAW is so polyphagous. The two strains look identical, but can be distinguished using genetic markers (e.g. polymorphisms in the mitochondrial COI gene). Both strains are present in Africa. 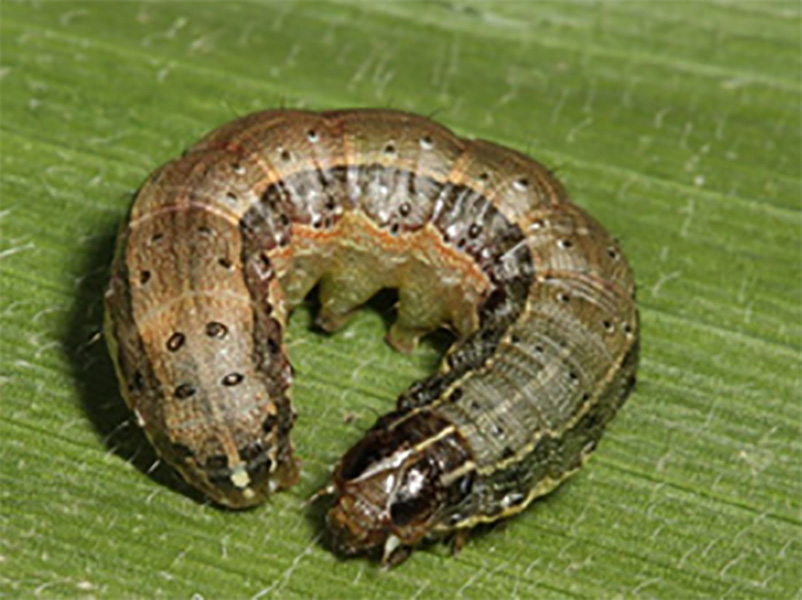 How can Fall armyworms be controlled?

Chemical pesticides can be effective against Fall armyworms, but resistance to many chemicals has long been an issue for the FAW throughout its native range. We are still determining which pesticides are effective against the FAW blighting Africa. The variable efficacy observed in the field is, at least in part, due to their resistance to some of the chemical pesticides used. For example, African FAW is totally resistant to pyrethroids and control varies from very poor to adequate when carbamates and organophosphates are used. Chemical active ingredients that appear to be effective against FAW include emamectin benzoate, dimethoate, and chlorantraniliprole (see here for a list of approved pesticides in South Africa)

As well as resistance issues, control of FAW using chemicals is made difficult by the larva’s tendency to hide within the whorls and reproductive parts of the host plant, away from spray applications. For this reason, the crop should be sprayed as soon as the pest is noticed on exposed leaf surfaces, and during the early development stages of larvae; late-stage larvae may prove to be very difficult to control due to their large size and their habit of feeding on the tassels, ears and cobs, where insecticides cannot easily reach them. Farmers are urged to refrain from using any concoctions or unregistered mixtures and to adhere to the label specifications and dosage rates of the registered products.

There are alternative approaches to chemicals, however. In parts of their native range in the Americas, genetically-modified Bt maize is grown to combat FAW. This may also be an option for South Africa and some other countries where GM crops are already grown, but many parts of Africa do not currently allow or welcome GM varieties and FAW has evolved resistance to some Bt toxins, with evidence for cross resistance.

There are non-chemical, biological pesticides that could also be effective against FAW. For example, there is a specific baculovirus that has been formulated as a biopesticide against the Fall armyworm (SfMNPV), but this is not yet registered for use in Africa. The bacterium Bacillus thuringiensis can also be effective when applied as a spray, but some strains of Bt may not be effective against fall armyworm. Likewise, there are some isolates of Beauveria bassiana that can be effective biopesticides against FAW. Biopesticides tend to have much narrower target spectrums than chemicals, which is good for the environment as beneficial insects and other organisms are not harmed. But this also means that they can only be used for a limited number of pests, often making them more expensive than chemicals.

Finally, there are some other indigenous approaches that could be effective against armyworms, including the use of local plant extracts to produce botanical pesticides (such as Tephrosia vogelli and neem), and the addition of sand or grit to maize whorls where the armyworms are feeding can be effective.