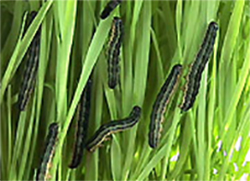 FAW infestations were reported affecting early planted maize in most of the Western and Southern Rift Valley counties in Kenya during April. Affected farmers executed control operations with material and technical support from MoA. In Zimbabwe, FAW infestations continued attacking irrigated maize at vegetative stage in Muzarabani and Chiredzi districts. Affected farmers carried out control with material and technical support from the MoA. Although no updates were received in other IRLCO-CSA member states (Malawi, Mozambique, Tanzania, Zambia, and Zimbabwe), and elsewhere across different regions at the time this Bulletin was compiled, it is likely FAW infestations and outbreaks occurred in irrigated and/or late planted maize and other susceptible crops.

FAW will likely persist and continue affecting rain-fed and/or irrigated maize and other crops across sub-Saharan Africa, Asia, and elsewhere during the forecast period.

There is a likelihood of AAW infestations continue attacking young and late planted maize and other crops as well as pasture in Tanzania and Kenya, and perhaps other countries during the forecast period.