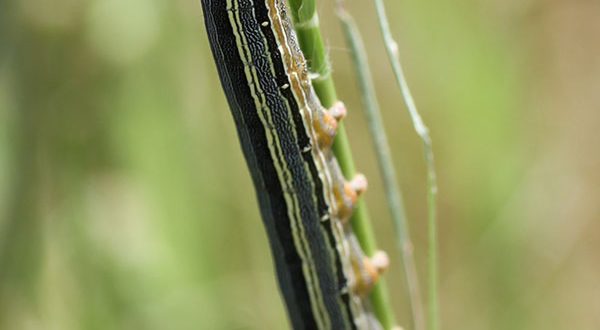 Fall Armyworm (FAW) (Spodoptera frugiperda): FAW infestations continued in Zambia, Malawi, and Zimbabwe where control operations were carried out by the affected farmers with material and technical assistance from their respective Ministries of Agriculture (MoA).

Severe FAW infestations were detected in maize fields in all 10 Provinces of Zambia. The pest was also reported in Masvingo, Mazoe, Gokwe, Lupine and Hwange areas in Zimbabwe and in all eight Agriculture Development Divisions (ADD) in Malawi with the highest infestation reported in Blantyre ADD where 35,983.4 ha of maize were infested in seven districts. Control operations were carried out by the affected farmers with technical and material support from the MoAs. FAW infestations are expected to have caused mild damage to cereal crops in Kenya, Tanzania, and Mozambique.

AAW infestations were reported in 11 regions of Tanzania (Morogoro, Arusha, Manyara, Tanga, Dodoma, Lindi, Geita, Katavi, Kilimanjaro, Coastal and Singida). In Malawi the pest was reported in Phalombe, Neno, Mulanje and Chiradzulu districts of Blantyre ADD attacking 345 ha of maize, 831 ha of rice and 32 ha of pasture. In Kenya, AAW outbreaks were reported in Makueni and Taita Taveta in the southeast part of the country. In Taita Taveta, infestations by 5th and 6th instar larvae at a density of 125 caterpillars per sq meter were observed in 3 locations. A few cases of infestations were also reported in Mwtate sub-county, but additional detail has not been forthcoming.

It is highly likely that FAW will continue affecting rain-fed and/or irrigated maize and other crops across sub-Saharan Africa, Asia, and elsewhere during the forecast period. Active monitoring, surveillance, crop scouting, timely reporting and control interventions remain critical to avert any major damage to crops and pasture.

There is a likelihood of AAW infestations to continue attacking young and late planted maize and other crops and pasture in affected countries.