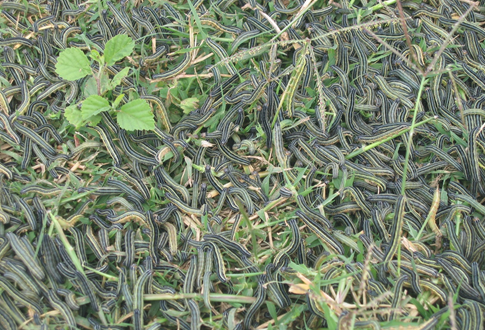 Fall Armyworm(FAW) (Spodoptera frugiperda): Infestations of FAW populations were reported in irrigated maize in Lakeshore and Shire Valley in Malawi. FAW infestation was also reported in Mildland, Zimbabwe and a similar situation is expected elsewhere where the pest presence has been confirmed.

FAW outbreaks were reported affecting irrigated maize in all 8 Agricultural Development Divisions in Malawi, the most affected areas being districts bordering Lake Malawi and Shire Valley. No reports were received from other countries, however, the pest presence is likely in other maize growing countries in Africa, Asia and elsewhere where maize crops and other cereal crops are in season or are under irrigation schemes.

There were no reports of AAW in outbreak or invasion areas.

FAW is likely to continue affecting rain-fed and/or irrigated maize and other cereal crops across sub-Saharan Africa, Asia, and elsewhere during the forecast period. Active monitoring, surveillance, reporting, and timely control interventions remain critical to prevent any major damage to crops that can severely affect food security and economic well-being of resource challenged peoples and communities across FAW prone countries.

Significant AAW appearance is unlikely during the forecast period. However, with the arrival of the seasonal rains, trap operators should continue replenishing and inspecting traps.