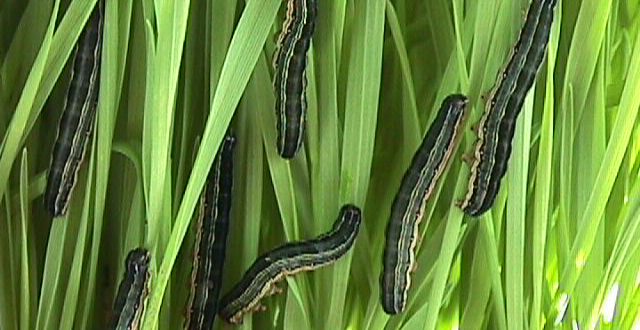 Fall Armyworm (FAW) (Spodoptera frugiperda) : FAW was reported in Arumeru Region in Tanzania and a similar situation is likely in other countries where maize is in season and irrigation is in progress.

African Armyworm (AAW) (Spodoptera exempta): AAW outbreak was not reported during this month.

FAW outbreaks were reported in maize crop in Dondo, Nhamatanda, Caia districts, Mozambique; Central, Luapula, Lusaka, Muchinga, North western, Northern, Southern and Western Provinces of Zambia; and Machinga, Salima, Shire Valley and Blantyre Agricultural Development Divisions (ADD) of Malawi. Control operations were carried out by the affected farmers with technical and material support from MoAs. FAW infestations were also reported in maize fields in Dodoma, Irringa, Mbeya and Njome regions in Tanzania. It is likely that the pest was also present in irrigated and/or in-season maize and other cereal crops in outbreak countries and regions elsewhere (BHA/TPQ, DLCO, DLCO-EA).

AAW outbreaks were not reported during this month (BHA/TPQ, DLCO-EA).

No major AAW activities are expected during the forecast period (BHA/TPQ).