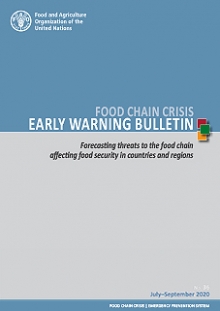 In North Africa, in the second quarter of 2020, Mauritania became the third North African country to report FAW officially, after Sudan (2018) and Egypt (2019). The pest will continue to spread northward, putting the oasis system in Morocco’s Western Sahara at risk. In addition, the risk may extend to newly reclaimed irrigated vegetable fields in the coast of Oued Ed-Dahab Province. During July–September, FAW host plants are widely cultivated, and climatic conditions will favour the spread and damage of FAW in affected countries.

In Southern Africa, as maize will not be available in most countries, any significant amplification of FAW during the forecast period is less likely.

In West Africa, maize will be available and will be in the growing and harvesting stages in most countries of the subregion. Therefore, there will be a high risk of FAW amplification during the forecast period.

Spread of Fall armyworm during July–September is predicted to be modest. FAW spread is influenced by rainfall and unsuitable host crops, and this forecast period coincides with rainy seasons and the harvesting stage of maize, the pest’s preferred crop. Unlike the spring and summer seasons, pest abundance and movement are limited due to weather conditions unfavourable to the adults’ flight activity. The infestation and damage caused by FAW also depends on the stage of the crop at which insect activity may be focused on the whorl of the maize. Compared to the damage caused at early crop stages and during the vegetative to growth stages, damage at later stages (mostly at ripening) remains insignificant.

In South Asian countries such as Nepal, India, and Bangladesh, FAW will remain continuously active until early July. However, the pest is expected to reduce over time because of the absence of desirable host crops. In contrast, FAW will remain active in coastal areas of the Asia and Pacific region, because of the cropping pattern and climatic factors. In general, the pest will march continuously from one area to another once it becomes established, but at a modest level.

In West Asia, Oman and the United Arab Emirates officially declared FAW to be present in 2020. This indicates the pest’s ability to expand its geographical distribution over hundreds of kilometers in the arid conditions of the Arabic peninsula (it was first reported in Yemen in 2018). The new reports may support the possibility of FAW spread into the Jazan, Najran and Asir Regions in Saudi Arabia. In addition, the presence of the pest in the United Arab Emirates will pose a risk of introduction into Qatar and Bahrain in the coming months.

In Melanesia, Fall armyworm (FAW) was recently recorded in both Timor-Leste and Papua New Guinea, in January 2020. In Timor-Leste, damage has been reported in maize, sugarcane and local pastures (grasses), which may have a broader impact on local livestock production. In Papua New Guinea, FAW has the potential to cause significant damage to village-level crops such as maize, sorghum, rice and other crops (such as vegetables), and to have a significant impact on large commercial production crops such as sugarcane and rice.

In Australia and New Zealand, FAW was first found on the Torres Strait islands of Saibai and Erub in January 2020. Since then, it has been detected in Queensland at Bamaga, Bowen, Bundaberg, the Burdekin, Croydon, Emerald, Lakeland, South Johnstone and Tolga. FAW has also been detected in the Northern Territory and in northern Western Australia. Because of trade and the moth’s strong flying abilities, it has the potential to spread further, including to Pacific Island countries. Farmers will require significant support through integrated pest management techniques to sustainably manage FAW in their cropping systems.

This forecast is published by Lancaster University’s Armyworm Network: http://www.armyworm.org/. It is an extract from FAO. 2020. Forecasting threats to the food chain affecting food security in countries and regions. Food Chain Crisis Early Warning Bulletin. No. 36, July–September 2020. Rome.